In Northern Virginia, there are four jurisdictions that aggressively prosecute sex crimes in Virginia. These are Fairfax, Loudoun, Prince William and Arlington. All of these jurisdictions had a change in the Commonwealth Attorney’s Office in terms of leadership. Part of the platform for the new Commonwealth Attorneys in Fairfax, Loudoun, Prince William & Arlington was the more aggressive protection of women and children.

Loudoun, Prince William and Arlington all have Commonwealth Attorneys that are women and they have all pledged to protect to women and children.

Since few criminal allegations carry a greater stigma than sex offenses, defendants accused of these type of offenses need the most aggressive, knowledgeable and best legal representation available.

If you are facing a charge in Prince William County, Loudoun or Arlington, contact the Law Offices of SRIS, P.C. to speak with one of our sex crimes attorney that defend clients in Prince William, Loudoun and Arlington today at (703) 278-0405 to schedule a free consultation and discuss your options. A person accused of an offense does not have to live in terror. There are options and defenses available to you or your loved one. What you need is the best defense possible.

Frequently, if an individual is facing a sex crime where the individual either knows the alleged victim or is being accused of an internet sex crimes, then the individual is going to be aware of the investigation before an arrest is made. The moment you are aware you may be being investigated is the time you need to secure the best sex crimes defense lawyer for you. Do not wait. Call the Law Offices of SRIS, P.C. and speak with one of our criminal attorneys that defend clients in Prince William, Loudoun and Arlington today at (703) 278-0405.

Understand that society wants to protect the victims of penal offenses. However, that does not mean the individual accused of the these type of offenses does not have rights and privileges accused of these sex crimes. 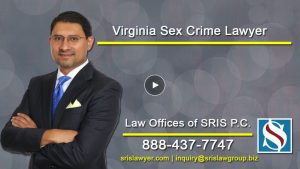 Sex crimes is category that includes a wide variety of offenses. Majority of these crimes in Virginia are felonies. Keep in mind that a sex crime does not necessitate physical contact and in Virginia, you can be charged with a sex crimes for simply talking to an alleged minor in a sexual way. For example, indecent exposure, unlawful filming of a minor and online solicitation of a minor carry incredibly harsh penalties in Virginia.

Child pornography: Possession, production, distribution or financing of images of children engaged in sexual activity is a crime under both Virginia state law and federal law. The relevant parts of the Code of Virginia are § 18.2-374.1 and § 18.2-374.4.

Carnal knowledge of a minor: Virginia Code states that a minor cannot consent to a sexual relationship with an adult. The age of consent in Virginia is 18. However, an age exception applies when teenagers are between the ages of 15 and 17. When this occurs, the minor will not be prosecuted for a more serious sex crime offense in Virginia so long as their partner was of a similar age.

Being Accused of a Sex Crime in Prince William County, Loudoun County and Arlington County – Get The Best Sex Crimes Lawyer in Virginia

Magistrates are given guidelines by the State of Virginia to determine the appropriate amounts of bail. In most instances, certain crimes, including felony sex crimes and sex crimes involving a minor, these guidelines contain a presumption against bond, which means the magistrate does not have the power to set bail.

Sex crime indictments in Virginia are delivered by a Grand Jury. In most cases, defendants accused of a felony offense are entitled to a preliminary hearing where the Commonwealth must prove probable cause. Probable cause is very easily met in Virginia especially when it comes to serious felonies. When you are facing a sex crime and you have to go through the process of getting bond, other evidentiary motions, a preliminary hearing and other steps, it can be very scary. That is why you need to get the best sex crimes lawyer in Virginia. Call the Law Offices of SRIS, P.C. to speak with a sex crimes lawyer if you are charged in Prince William County, Loudoun County or Arlington County.

The penalties for sex crimes in Prince William County, Loudoun County, Arlington County and elsewhere in Virginia, are severe and can even result in life sentences. If you are convicted of a sex crime in Virginia, then you become a convicted sex offender. A conviction for a sex crime may result in jail or prison time, pay punitive and compensatory fines, and be subject to other penalties as well.

Individuals convicted of certain offenses such as rape, forcible sodomy, object sexual penetration, carnal knowledge of a minor younger than 15 years old, or indecent liberties with a minor in Virginia will be required to register in a statewide sex offender registry.

Other sex crime convictions in Virginia also require registration in a sex offender registry. An experienced Virginia sex crimes lawyer who defends clients in Prince William County, Loudoun County and Arlington County however, can petition to have this requirement dismissed following successful completion of prison time and other penalties.

Charged with a offense in Prince William, Loudoun or Arlington – Get the best sex crimes lawyer in Virginia

The Virginia defense lawyers who work with Mr. Sris Attorney at Law are experienced in strategies that help clients achieve the best possible outcome in whatever legal situation they are up against. If you are charged with a offense in Prince William County, Loudoun County or Arlington County, call us today for a consultation at (703) 278-0405.