Rigid enforcement of traffic laws is an inevitable result of the need for disciplined driving habits in Virginia. These regulations are therefore a blessing in disguise for every pedestrian and driver who uses the road. If all drivers make sure they stay within the specified limits, everyone is protected from injury caused by accidents. Reckless driving is not simply a traffic violation but a class one misdemeanor. A  defendant accused of reckless driving You should immediately contact an experienced reckless driving attorney to keep your license and save yourself from jail. The Law Offices of SRIS, VA PC Attorneys can provide you with the professional assistance required for your Virginia reckless driving case.

Recklessly operating a vehicle without heeding regulations and improperly operating a motor vehicle are popular offenses under Virginia traffic laws. Virginia Code Section 46.2-852 makes reckless operation of a vehicle on a highway result in injuries punishable by high fines or even jail time. Injury includes not only the loss caused to the life and body of a person, but also includes damage to property. Whether or not a restricted speed limit was reported has no bearing on the outcome of the case.
Virginia Code Section 46.2-862 deals with exceeding the posted speed limit in Virginia. The officer initiating the traffic stop has the authority to decide whether to charge you for reckless driving in Virginia  .
If he decides that you should represent your case in court, he would charge you. However, the officer cannot escape his obligation to prove in the Virginia Courts that he drove recklessly when the traffic stop was initiated. 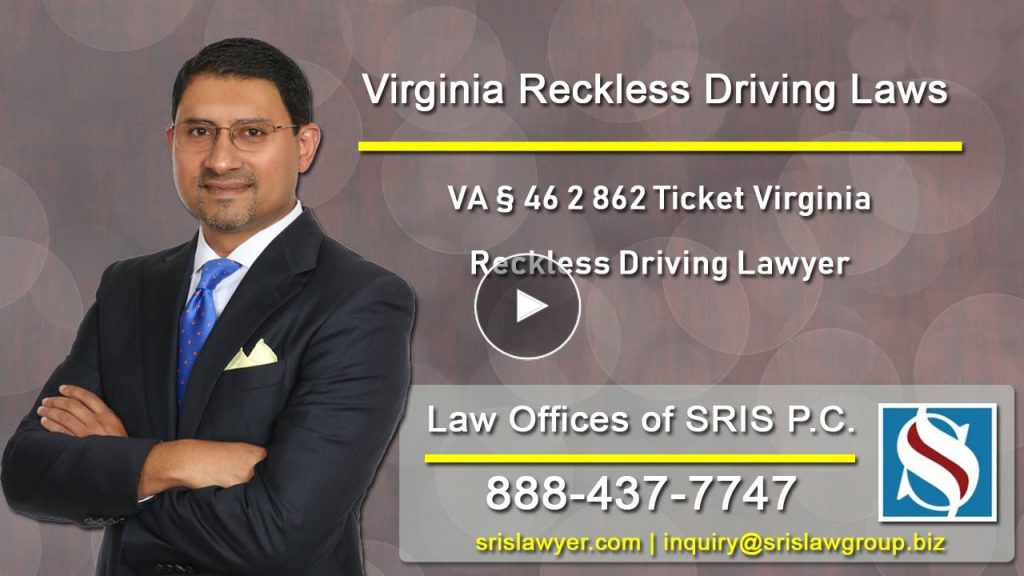 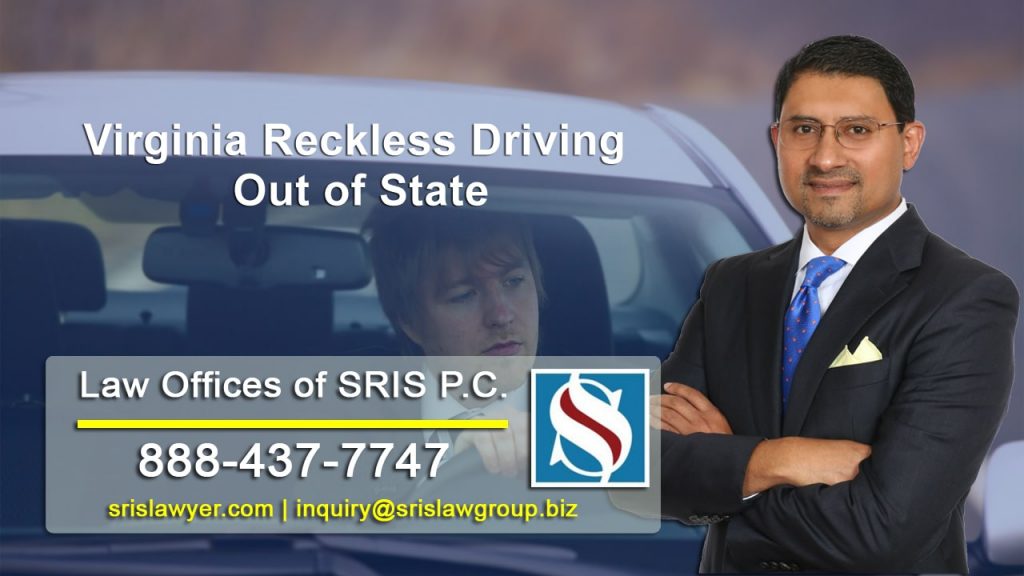 A driver is guilty of racing in Virginia under Section 46.2-865 if the prosecution successfully proves that the defendant’s intentional acts in engaging in a race with two other vehicles on a highway or at any driveway located at a church, school, or any property open to public access without the proper permission of the owner.

EFFECT OF RECKLESS DRIVING IN VIRGINIA

In Virginia, many people who have lived in the state for many years are surprised when charged with reckless driving, as they are not aware of what reckless driving is and how it can affect one’s life. Most Virginians are surprised to learn that it is a criminal offense that can lead to jail time, costly fines, and loss of license to operate.

SERIOUSNESS OF RECKLESS DRIVING IN VIRGINIA

Brilliant arguments aggressively presented are key elements needed to successfully overturn a reckless driving conviction in Virginia. There are circumstances when traffic violations can be paid in advance. A person may or may not show up and these violations have a minor impact on the driver’s record, three, four or even six points. Although the process of charging a defendant with reckless driving is similar to that of a traffic violation, for a reckless driving charge the defendant has a court date and there is a mandatory requirement to appear at the hearing.
The seriousness of the charge and its impact are known only after the defendant’s appearance in a Virginia court. Therefore, it is important that the people who get those tickets seek immediate help. They may consult an attorney for professional advice on the proceedings. The Law Offices of SRIS, PC attorneys in Fairfax VA will give you detailed advice on what to expect at a hearing: a trial could be held where the officer testifies, the defendant testifies, and the judge decides if a penalty should be imposed. on the officer’s testimony, the defendant’s testimony, and all evidence from both sides to reach a decision on the defendant’s guilt.
Later, fines and costs are imposed. There would be demerit points that the Department of Motor Vehicles could estimate. The insurance could enact higher premiums. Finally, if the driver is convicted of reckless driving, he cannot deceptively conceal it as it will show up on his criminal record.

FIRST TIME OFFENDERS AND PENALTIES FOR RECKLESS DRIVING IN VIRGINIA 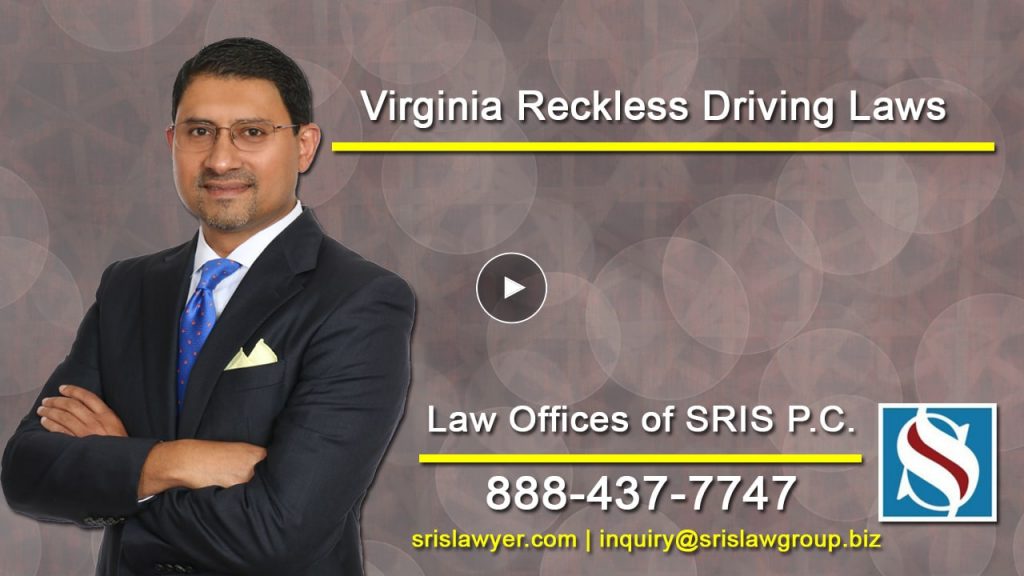 PENALTIES FOR RECKLESS DRIVING IN VIRGINIA

Penalties that may be imposed on anyone convicted of reckless driving in Virginia include the imposition of six (6) DMV points or the imposition of a $2,500 fine or license suspension for six months or imprisonment for 12 months. .
It is important to get professional help from a Virginia attorney who is knowledgeable about local court procedures. The  Law Offices of SRIS, VA PC  Attorneys   will provide you with the best advice on how to proceed with the charge.

PENALTIES FOR RECKLESS DRIVING IN VIRGINIA

Reckless driving is a class one misdemeanor that can lead to fines of $2,500 and twelve-month imprisonment. Fines for less serious reckless driving offenses can be anywhere from $300 to $1,000. The amount of fines may differ based on circumstances that lead to the stop and the discretion of the judge. Then court costs are an additional burden on the defendant and these costs maybe $80. Thus, reckless driving will carry a maximum of 6 points. The actual fine you will receive will vary greatly, in part based on your record, the local court procedures, your speed if applicable, and numerous other factors. In many cases, the average fine for a reckless driving ticket is regarded as a regular speeding ticket, which is $6 for every mile per hour over the notified speed limit
But average fines vary drastically from court to court. In cases involving speeding less than 90 miles per hour, some courts will order a fine of $6 for every mile per hour you exceed the speed limit, others will order a fine of $10, and other courts will impose another amount. Virginia law gives you 30 days to pay everything you owe to the court. If you need additional time, you can ask the court for a longer payment period.

THE FINING PROCEDURE IN VIRGINIA

On charges related to speeding less than ninety miles per hour, some courts order a fine of $6 for each mile per hour over the posted speed limit. For the same set of facts, others will order a fine of $10 and other courts will impose other different amounts. Regarding the time to pay the fine, Virginia law allows the defendant to pay within 30 days. You can still ask a Virginia court to extend the time limit for payment.

OTHER DAMAGES CAUSED BY RECKLESS DRIVING IN VIRGINIA

A driver in Virginia would be baffled to learn how reckless driving can transform their life with consequences other than criminal convictions and fines.

AN INCREASE IN INSURANCE COSTS

The effect on insurance is more noticeable. According to a survey, if one is found guilty of reckless driving, the ruling will inevitably influence the payment of the insurance premium and can lead to an increase in an average of 21.8%. If the insurance company considers the sentence for several years, the expense worsens. Hiring an attorney costs some money up front, but avoiding a reckless driving conviction is a priority.

EFFECT ON SECURITY CLEARANCES IN VIRGINIA

Most reckless driving offenders in Virginia are concerned with the question of whether the charge will affect the security clearance. The answer to this question depends on the number of charges and the severity of the charges. If one has only one charge then it may not have adverse security clearance consequences. If one has a series of traffic related offences, one’s security clearance will surely be affected. Self-reporting of misdemeanor convictions such as reckless driving is required if a driver is ticketed.
If a court enters an incarceration order at the end of a reckless driving case, the data is processed and remains viewable during background checks in Virginia.

EFFECT ON EMPLOYMENT IN VIRGINIA

One’s employment status is altered with a reckless driving case and can result in unemployment. If you have to operate a car for a living or have company insurance for occasional errands, your supervisor won’t want to find out about a reckless driving conviction. Today’s contracts include clauses that allow employees to be terminated based solely on their speeding records. You can also find out if a reduced result, such as a speeding conviction, would reduce the risks associated with your employment in Virginia.

EFFECT ON CRIMINAL RECORD IN VIRGINIA

A criminal record lasts a lifetime. Virginia doesn’t even allow you to expunge the records later if the court convicts you.

Many clients who are booked for reckless driving rely entirely on their operating license for the job. Some judges will suspend driver’s licenses in cases where the driver was operating at twice the speed limit. Like jail time, traveling at speeds above ninety will result in a suspended license depending on local rules. Drivers with a commercial license in Virginia must be extremely cautious, as they can lose their commercial license and lead to the loss of their vocation.

GROUNDS THAT MUST BE PROVEN FOR A RECKLESS DRIVING CONVICTION:

The attorney representing the State is tasked with proving beyond doubt that the defendant was operating the vehicle. To a common man, proving that one was driving a car may seem simple, however, proving that one is driving a car is a difficult job. It involves other nuances and can be distressing. Impressive arguments from Commonwealth counsel and the defense decide the outcome. The release of the defendant in these cases depends on the strong arguments presented by the defense attorney. Virginia courts have decided cases with very unique issues, such as whether a driver sleeping at the wheel of a car was driving the vehicle. In cases involving reckless speeding,

If a person is charged with reckless driving in Virginia, appointing a uniquely qualified attorney who can offer professional guidance on the proceedings of the case will decide the outcome of the case. The competent assistance of a professionally qualified attorney will guarantee a reduction of the charge to the incorrect operation of the charge of the vehicle. A reckless driving charge is a criminal offense, but the improper operation of the vehicle charge simply shows up on one’s record in Virginia.

RECKLESS DRIVING IN VIRGINIA AND DRIVERS FROM OUT OF STATES