If you are someone who is traveling through Virginia, there is every reason for you to be extra cautious

This may come as a shock to someone who is not a resident of Virginia. 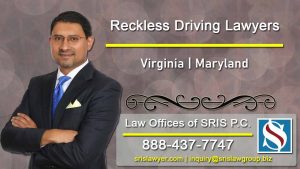 Unlike Virginia, some states fail to consider reckless driving seriously. If you happen to be a resident of such states, you will drive through Virginia recklessly under the mistaken belief that reckless driving is not a serious offense in Virginia.

You are probably unaware as to what is a reckless driving ticket in Virginia. Operating a vehicle in a manner that is dangerous to others is considered reckless driving. The term dangerous is too broad a term for one to understand what exactly it means.

At times when vehicle drivers cause an accident and end up causing significant damage to property, such drivers are also charged with reckless driving. In Virginia, the law is stringent and imposes severe penalties for a reckless driving conviction.

The penalties may be a fine of $2,500 and/or one year in prison. Further rashly operating vehicle has certain long term consequences that are so severe that you would regret this act of reckless driving for the rest of your life. Any reckless driving conviction in Virginia results in a permanent criminal record. This criminal record may determine some of your most important decisions about your future such as employment, housing, insurance, security clearance, etc.

The implication of this is that if a person who is not a resident of one state is convicted for reckless driving in another state, the second state would immediately send information pertaining to this reckless driving charge to the home state of the offender.

If you are a resident of New Jersey and have been charged with rashly operating vehicle while driving through Virginia, you should be aware of the special provisions that are applicable to New Jersey residents. For offenders who are New Jersey residents, additional fees which is also termed surcharge will be imposed. The reason for this additional fees is the difference in the punishments imposed in both states. In New Jersey. Rashly operating vehicle is considered a 5 point violation in New Jersey while it is considered a 6 point violation in Virginia. To make good this difference, offenders are charged with additional fees.

A skilled attorney will take the necessary steps to make sure court proceedings are conducted in your absence in most instances. By doing this, the attorney is saving you a lot of money and you can also avoid the strain of traveling back and forth.

A lawyer who has handled several rashly operating vehicle cases will explain the nature of charge imposed on you and will discuss with you about the strategies he plans to take.

Mr. Sris has defended over 1000 clients charged with reckless driving in Virginia. C