Speaking to a criminal lawyer should be your immediate course of action if you are charged with violating Virginia’s Prostitution laws.

You may not be aware that the law enforcement in Arlington, Fairfax, Chesterfield, Henrico, Norfolk & Virginia Beach conduct frequent sting operations. 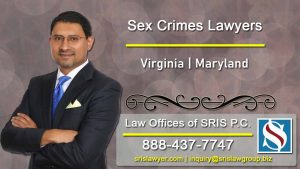 Trying to obtain sex for money is a serious sex offense in Virginia and high fines are imposed in addition to long periods of imprisonment.

Virginia law makes solicitation also illegal. The implication of making solicitation illegal is that if one person gives money to another for engaging in sexual acts then the act is punishable as class one misdemeanor.

The offense of obtaining money for sex is considered a class one misdemeanor. The charge is considered serious and is punishable as a Class 6 felony if one obtains sex for money and individual who sex is solicited from is between the age 16 to 18. If you pay someone for sex who is younger than 16 years of age, then Virginia considers such an offense as Class 5 felony. For class one misdemeanors, Virginia imposes a punishment of one year and a fine up to $2,500

For a Class five felony, Virginia law imposes a penalties of one year to ten years based on judge’s discretion. As the facts of each case vary, the judge decides the punishment based on the facts. In case you are charged with exchanging sex for money, obtaining the consultation of a Virginia criminal lawyer is the best decision you can take

Keep in mind that a conviction for violating Virginia sex crimes laws can cause you to lose your security clearance. Furthermore, if you have an immigration status other than US Citizen, you may lose your immigration status and thus lose your ability to stay in the US. Not all people who are accused of prostitution get involved in it intentionally. In most cases, they become victims of police sting operations

In such situations, the persuasive arguments of an experienced lawyer may convince the prosecutor or the court that the sting operation was actually police entrapment In prostitution cases where police entrapment has caused the offense, a skilled VA criminal lawyer may be able to prove in court that the offense was committed not by the intentions of the accused but by the inducement of the officer.

Frequenting a bawdy place is another common offense related to obtaining sex for money and is considered a class 1 misdemeanor in VA.

Mr. Sris has defended clients charged with violating Virginia sex for money laws all throughout the Commonwealth of Virginia. Turn to him if you need a Virginia solicitation lawyer.

Why You Need A Virginia Criminal Lawyer For Solicitation, Pandering, Or Hiring A Prostitute

Because solicitation of prostitution punishes the mere asking of sexual activity with an exchange of money, there was no sexual activity completed will not be a feasible defense in Virginia. Soliciting a hooker is often called Solicitation for Prostitution. It occurs whenever a person uses words, activities, or any kind of conduct in an effort to take part in an act of obtaining sex for money. It describes the action of requesting sexual contact with another person by providing money. In Virginia, solicitation of prostitution may mean either when his or her availability to do sexual acts for reimbursement is advertised by a prostitute, or every time a patron offers to cover sex for money.

Prostitution includes selling sex for money or other financial remuneration. Aiding prostitution is understood to be transporting anybody to any location with the goal of prostitution when the individual knows, or should have known, the crime was going to happen. Essentially it is the act that is illegal, while solicitation is an attempt to perpetrate that act that is prohibited. In Virginia, it is illegal in every county.

Pandering laws target people who provide services to facilitate the sex trade, advertise for, or solicit money from an act of prostitution. Such charges must be fought tooth and nail. There are a lot of prostitution-related charges that rise to the degree of a felony offense and bring more significant penalties if you’re convicted.

Our seasoned Virginia prostitution lawyers are ready to secure and safeguard your rights. For that reason, it’s important to employ a Virginia prostitution lawyer who will be able to help you construct the greatest possible defense strategy for your situation. Since exchanging sex for money laws can at times become complicated, it is critical to have a skilled Virginia prostitution lawyer who has defended solicitation cases. The laws in Virginia make it illegal for anyone to engage in or agree to engage in any sexual activity for reparation. Prostitution laws make it clear as to what is allowed and what is not allowed per the laws of Virginia. Depending on the actions taken by the accused, the individual could be charged with statutes like promoting or procuring prostitution. Regardless of what offense you are accused of, you can be given the representation you have earned by an experienced Virginia sex crimes lawyer from the Law Offices Of SRIS, P.C.

Whether a car is used by a person or allows for the vehicle to be used for prostitution or perhaps to aid the occurrence of prostitution, the person is guilty of using a vehicle to transport a prostitute. If somebody who is 16 or 17 is solicited by someone to commit an act of obtaining sex for money, that’s a Class 6 felony, which may lead to more than 1 year in prison.

The goals of someone can readily be misread, leading to an individual to inadvertently have sex with a prostitute in Virginia. The arrangement doesn’t need to be explicit, because the activities can be sufficient to demonstrate the agreement. Sit down with an experienced Virginia criminal lawyer who might be able to aid you know your rights and also the way in which the government operates in regards to a solicitation charge.