Drivers from other states may be surprised to learn how seriously some traffic offenses are treated by Virginia courts. Judges in Warren County routinely sentence defendants to jail time for reckless driving and other traffic violations which are classified as Class 1 or Class 2 Misdemeanors.

Reckless driving is defined as driving in a way that jeopardizes people or property. For this traffic violation, you will be charged with a class 1 misdemeanor, which is a criminal offense and attracts harsh penalties. Therefore, it is important to you consult with a Warren reckless driving lawyer to discuss your case in order to know the defenses.

Reckless driving is often charged on the same kind of summons, but it is much more serious than a simple speeding ticket. By Virginia law, speeding at 20 MPH more than the posted speed limit, or driving at more than 80 MPH regardless of the posted speed limit SHALL be charged as reckless driving. Reckless driving is a class 1 misdemeanor punishable by up to one year in jail, a six month license suspension, and up to a $2,500 fine, not to mention the points against your DMV record and the insurance consequences.

A reckless driving offense that results in a person’s death can be charged as manslaughter.

If an officer charges a driver with reckless driving for speeding excessively, then that officer should clearly indicate so, both verbally and on the charging document. Nevertheless, some defendants think they are charged with simple speeding, when in fact, they have been charged with the more serious offense of reckless driving. If the law section noted on the summons is § 46.2-862, then the charge is reckless driving due to excessive speed. The officer should also note on the summons, the method of determining the speed along with other details of the allegation. 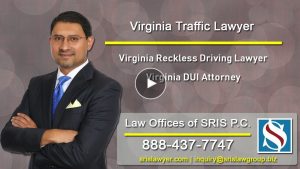 A knowledgeable Warren traffic lawyer can tell you if you need to personally appear in court. Even if the officer tells you that you must appear, sometimes the Warren traffic attorney can prevail on the judge to excuse your presence.

What Are Some Of The Commonly Charged Traffic Tickets in Warren County Virginia?

Traffic tickets are also known as traffic infractions in Warren, Virginia. They may be considered moving violations, which usually result in demerit points against your license, or non-moving violations, which typically result in fines only. Either way, the conviction is likely to be entered on your DMV record. When you get a traffic ticket in Warren County, Virginia, the officer typically gives you a Virginia Uniform Summons. When you get a simple traffic infraction, you can usually prepay the fines and you do not have to go to Warren traffic court.

VERY IMPORTANT NOTE: A traffic ticket conviction that is considered a moving violation in Warren Virginia will result in points on your license.

On a Virginia DMV record, demerit points will remain for two years and the record of the offense will stay on your driving record anywhere from 3 to 11 years, depending on the offense. In addition, your driver’s license could get suspended if you pay your fines late or accumulate too many demerit points. Common traffic infractions include:

Some traffic tickets are considered misdemeanors in Warren, Virginia. If you are convicted, you face more serious penalties, you may have a permanent criminal record, and be assessed demerit points on your driver’s record. Some common traffic violations that fall into this category include:

If you’ve been charged with driving without a license in Virginia, don’t make the common mistake of trying to go it alone without an experienced Warren Virginia traffic lawyer. You need an aggressive and knowledgeable Warren traffic attorney who will fight for your rights and, where appropriate, negotiate a favorable outcome. Let us be your Warren traffic lawyer.

DUI. A first offense DUI charge is a Class 1 misdemeanor. The penalties can include a fine of between $250 and $2,500, jail sentence of up to one year, revocation of your license for one year, and more. Speak to a Warren traffic lawyer.

Because so many people travel through Warren County, law enforcement is extremely vigilant and target high speed reckless driving, DUI and other moving violations offenses. So if you have been charged with a Warren high speed reckless driving offense, Warren DUI or Warren moving violation citation, call and speak to a Law Offices Of SRIS, P.C. King George lawyer for real answers and options. 888-437-7747.

Please understand that prosecutors aggressively prosecute traffic violations. The judges in Warren General District Court are not at all averse to sentencing people to jail on reckless driving cases and DUI. So if you have received a high speed reckless driving charge in Warren County or a DUI in Warren County, call our office immediately to secure skilled Warren traffic lawyer representation. Call today 888-437-7747.