Prince George Maryland Sex Crimes Lawyer – How To Proceed With The Legal Process?

Once you are found guilty of a sexual crime, your normal life is in danger. If he is registered in the Sex Registry, he is doomed forever. A Prince George’s attorney in Maryland specializes in handling all types of sexual perpetration. A proven sexual offense brings a criminal record that stays with its holder permanently or temporarily. A  Prince George sex crimes attorney in Maryland  is sure to possess the right expertise on the intensity of the crimes. Therefore, a suspect should consult our sex crimes attorney at the Law Offices of SRIS, PC to become familiar with the court procedures that must be complied with. 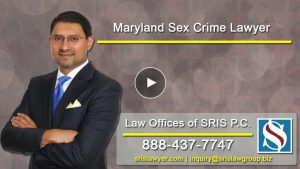 Sexual assault is a threat to cause physical harm, regardless of whether or not the act causes actual harm. At certain times, people threaten others with mere words just to show that they can inflict harm, but actually do not. They indulge in such acts just to scare the victims. These constitute assault charges. Keep in mind that the person threatening to cause harm should also have taken an action that could have resulted in bodily harm to the victim.

Mere statements of a threat do not constitute a crime. Intent and ability are important components of the crime. Whether or not a person has been able to cause bodily harm to the victim is a completely different matter, but if he has acted with the intent to cause harm to the victim, the given act is considered a crime.

The demographic profile of the victim also plays an important role in determining whether or not a given act is a crime. A particular act of threat will be considered a felony when presented to a child. The penalties vary when it comes to an adult. Therefore, it is obvious that several factors come into play when criminalizing a given act.

The sexual offense is more severe when it comes to inappropriate contact. Whether intentionally or unintentionally, if someone has touched another person inappropriately, he can be charged with the offense.

As soon as one is confronted with any attempt, the most imperative task for the victim is to contact the Prince George sex crimes attorney in Maryland. Because the crimes are considered very serious crimes and can carry punishments ranging from monetary fines to severe prison terms.

The charges have been categorized into various degrees, with the first degree being the most serious. But regardless of whether one is charged with first or fourth degree charges, retaining the services of a Maryland Prince George sex crimes attorney is absolutely essential. The defense and strategies used for the first degree charges by the Maryland Prince George sex crimes attorney are more complex because such charges carry the maximum and most severe punishments.

Is it possible to fight the cases without the help of Prince George sex crimes lawyer in Maryland?

In particular, sexual crimes are classified into four categories or degrees according to the seriousness of the crime committed.

A Prince George Maryland sex crimes attorney also examines whether the defendant used any of the following methods to injure or rape the victim:

A Prince George Maryland sex crimes attorney at the Law Offices of SRIS, PC is aware of the penalties that are commonly awarded for these first degree sex crimes. But she is awarded an enhanced set of penalties for a sexual offense that attests to the following consequences:

Life imprisonment is declared for the person who is found guilty of a sexual offense in the first degree. A Prince George lawyer in Maryland will never be able to obtain parole for a defendant, who kidnapped and abused a person, who is under the age of 16. Subsequent first-degree sexual convictions can also result in life imprisonment without the possibility of intermediate parole. If the offender is found to be at least 18 years of age and the victim is under 13, the former will be sentenced to prison for a maximum of 25 years with no possibility of intermediate parole. A Prince George Maryland attorney is familiar with the ways the courts operate during the prosecution of first degree sexual assault. Therefore,

A Prince George’s attorney in Maryland is aware of perpetration falling under this category of sex crimes. A second degree sexual offense is similar to a second degree rape. A lawyer from Prince George’s in Maryland describes a second-degree sexual offense as a crime that absorbs two mandatory components. Proven sexual interaction and withheld consent are the two main components of this crime.

Additionally, a Prince George’s Maryland lawyer checks to see if the offender abused the victim in any of the following circumstances:

A Prince George in Maryland attorney is aware of the penalties that are advertised for an offender, who is found guilty of any second degree sexual offense. The accused defendant is expected to serve a mandatory prison term of up to 20 years. If the second-degree felony injures a victim, who is under the age of 13, the former is forced to serve a prison term of up to 15 years. A Prince George’s attorney in Maryland possesses adequate legal knowledge of provisions that help reduce penalties under legal conditions. Therefore, it is advisable to stay in contact with a competent Maryland Prince George lawyer during these scenarios.

Only a reputable Prince George Maryland attorney from the Law Offices of SRIS, PC identifies several similarities between second and third degree sex crimes and works to dismiss the charges. But a lawyer from Prince George in Maryland recognizes the element of “sexual contact” as a factor that distinguishes third-degree from second-degree sexual offenses. In these cases, the criminal should have had forced sexual contact with the victim. However, reported sexual contact does not have to be full-fledged sexual interaction in these cases.

As with other degree sex crimes, a Prince George Maryland lawyer examines whether the recorded third degree sex crime was committed in any of the following circumstances:

A Prince George Maryland lawyer will be able to list several acts that legally fall under the fourth degree sexual offense. Some of the acts include:

The reported sexual interaction may be vaginal intercourse or minor sexual contact in these cases. A Prince George lawyer in Maryland examines whether the defendant is charged with or convicted of a sex crime in the near past. A first-time conviction of a fourth degree sex offense carries the following penalties: