FLSA Lawyer Near Me Virginia

Did you know that the Fair Labor Standards Act (FLSA) was enacted in 1938 to standardize wage protection for all employees in the United States? Unfortunately, only a few employees are aware of their rights and privileges, due to which employers take advantage of their ignorance. The attorney at the Law Offices of SRIS P.C. can educate employees about their rights. Our lawyer evaluates FLSA protection and its exemption status for the employees.

The Fair Labor Standards Act protects and guarantees minimum wages for employees. It is a federal law. In Virginia, the standard minimum wage was $7.25 per hour and was increased to $9.50 per hour starting January 1, 2021. Knowing such details is very important for employees, so it is advisable to contact an FLSA lawyer in Virginia for more information.

In New Jersey, the minimum wage is $14.53 per hour, effective from January 1, 2023, for most workers. If you need more information on this, contact our New Jersey FLSA lawyer. Also, if you are living in South New Jersey, discuss with a reputed FLSA lawyer NYC in your location.

In Maryland, the minimum wage is $12.50 per hour with effect from January 1, 2022. It may be noted that California has the country’s highest minimum wage fixed at $15 per hour. The minimum wage will increase yearly until the saturation point of $15.00 per hour in January 2026. The law also describes overtime pay for qualifying employees. According to the Act, the employer must compensate one and half times the regular rate for each hour worked over 40 hours per week. The situation is no different in Baltimore. If you are looking for a Baltimore FLSA lawyer to know more, contact the Law Offices of SRIS, P.C.

The modification to the FLSA involves increasing the national minimum wage. It has remained the same since 2009. In addition, the minimum wage laws passed by many states are higher than $7.25/hour. Our FLSA lawyer can provide more information on the modifications made.

Many employees wonder if the FLSA covers them or not. The coverage depends on their exemption status. There are many factors involved in whether they fall under certain exemptions. Professionals are excluded from FLSA. If you need clarification about whether you fall under FLSA exemptions, it is time to look for an FLSA lawyer near me today. Our FLSA lawyer can help you evaluate the applicability of the law.

Virginia Minimum Wage Act is another crucial part of FLSA. In this Act, the overtime provision is not present. All it says is to pay a minimum wage of $7.25 per hour. In this Act, the employee cannot file a lawsuit as it does not allow a private right of action. However, the underpaid worker can sue the employer for holding wages under Federal law. Take the help of our FLSA lawyer to protect your rights. 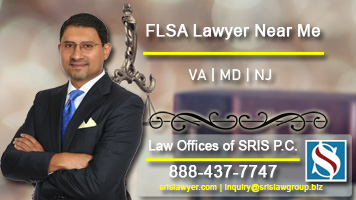 An employee can file a lawsuit against the employer if they do not adhere to the rules of the FLSA. The compensation owed by the employer to the employee falls under the civil claim. If you are caught in this situation, contact a seasoned FLSA lawyer immediately. An FLSA lawyer can do this efficiently compared to an employee fighting the case independently.

If you are worried about the payment part, many FLSA lawyers take up the case on a contingency basis, where you can pay after the settlement of the claim. A licensed lawyer for an FLSA claim could be ready to take up your case without any hesitation. So, do not try the DIY route; discuss the issue with an experienced FLSA lawyer to understand where you stand.

While choosing an FLSA lawyer, be clear on the percentage of settlement the lawyer may seek and the fees involved in filing a lawsuit. Discussing these issues in advance can give you peace of mind and confidence that you are safe. The settlement terms have to be addressed for both scenarios; if you win or lose the award. Speak to our FLSA lawyer at the Law Offices of SRIS, P.C., before you decide on your lawyer.

Employees are protected under the FLSA in different ways, including; setting a minimum wage, setting standard overtime pay, displaying the FLSA requirements, maintaining time and pay records, and finally, protecting children from working in hazardous environments, risking their health and life of the minor, and more. If needing more information on the protection of employees under the Act, contact an experienced FLSA lawyer.

Virginia has relied on the federal Fair Labor Standards Act (FLSA) to deal with overtime issues. However, it was in March 2021 that the state of Virginia passed its first independent overtime law. The Virginia Overtime Wage Act (VOWA) came into effect on July 1, 2021. An FLSA lawyer Virginia can give you more details on VOWA, so contact a reputed FLSA lawyer now.

The Act was not popular among employers despite the Department of Labor and Industry (DOLI) bringing out informal guidance. To put this confusion to rest, the DOLI provided relief from certain compliances as they increased the exposure to liability under the 2021 Act. Also, to give reprieve to the employers, the new Act was scrapped, and the old federal FLSA on overtime obligations was adhered to with effect from July 1, 2022. For more information, contact our FLSA lawyer

How it differs from FLSA?

Even though the VOWA created a close resemblance to FLSA, there is some minor difference the employers must make a note of.

The labor laws vary from state to state, and some states may have similar laws too. However, certain aspects like vacation days, benefits packages, or regular rest days are not defined by the states or the FLSA. But, FLSA has set guidelines for nursing breaks for mothers, just like in Virginia or other states. If you want more details on labor laws, contact an FLSA lawyer now.

Employees working for an unethical or unfair employer should contact a reputed FLSA lawyer in their best interest. An FLSA lawyer with a license to practice in Virginia and adjoined states is a good choice. The Law Offices of SRIS, P.C. has over two decades of experience handling FLSA; so get a case evaluation today.

The employee is ineligible for FLSA in the following conditions:

Certain factors determine the degree of control applied by the employer, the relative investments, and the permanency of the relationship between the employer and the employee. The control factor is the most important among the elements; it determines whether the employer controls the worker both in terms of work and the outcome of the product. Classifying employees as independent contractors can turn out to be a big mistake as only employees are eligible for benefits according to FLSA rules.

How to know if an employer is covered under the FLSA?

Many small employers need to understand that they are covered under FLSA. The truth is unlike other federal labor laws, the eligibility for FLSA is not restricted to the size of employees in the company. Companies engaged in interstate commerce, selling, handing, or working on goods or material moved or produced for interstate commerce are eligible for FLSA.